Richie’s Toy Store was created to honor the memory of a young man who was near and dear to our hearts.  Richie passed away in 2018 at the age of 23 from complications of Cystic Fibrosis. 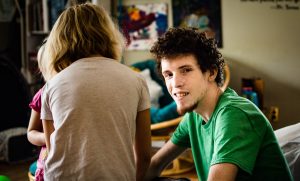 The Toy Store includes a play area in the store where young children can have fun while their foster parents shop for clothes and other items they need.  This play area is filled with toys that children can take home with them if they like.  The Toy Store also includes a closet filled with brand new toys.  These toys are offered to children who are new to Foster Care.  Richie spent 1390 days in foster care before being adopted at the age of 14 by the Delewski family.  Richie was the much loved son of a member of our administrative team.

Richie believed that the things we give to foster children send a message about their worth.  When he entered foster care at the age of 11 he was only given five minutes to pack his belongings.  He chose to take his Teddy Bear and a Lego set with him.  While Richie was in foster care his birth family was evicted from their apartment and all of his belongings were destroyed.  Richie moved through multiple foster homes and each time had to leave his toys behind. He arrived to his adoptive home at the age of 13 with nothing more then a trash bag of clothes and a few broken toys.

When Richie arrived to his forever home his new parents had only parented young children before him.  He longed for age appropriate toys like Knex, Legos or Nerf Guns but money was tight and it was quite some time before his parents could provide these things from him.  Back in 2009 there were no foster closets to help foster parents acquire things they needed.   Richie never complained and was always grateful for everything he received but he later admitted that he acutely felt that he was ‘different’ and sometimes ‘less than’ other kids his age who had things that he did not.

Richie was incredibly proud to work with Threads of Change and helped to create both the Birthday closet and the Angel Tree Christmas program.  We often sought his input as a former foster youth to help guide us in creating new programs. Richie embodied the idea of “Being the Change” for kids in foster care and we hope he would be proud of the work we continue to do.

If you would like to support the Richie Toy Store our Amazon Wish List includes many toys that children in care would be delighted to have for their own.  Items purchased from the Wish List ship directly to us.